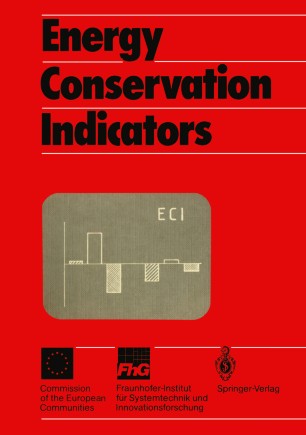 Improved energy efficiency has been a central objective in energy strategy for the European Community since the first oil crisis. And in 1986 the Coun­ cil of Ministers went even further than before in setting the ambitious target of improving, by 1995, energy efficiency in the Community by 20 %. But how should progress along this road be measured? What kind of yardstick should be used to assess the success of programmes for improving energy effi­ ciency? Does a drop in energy demand or in the amount of energy apparently required to produce one unit of GOP necessarily mean that energy efficiency is improving? Conversely, does a rise in energy demand really mean the opposite? Or can it be explained by factors such as climate, the business cycle, longer-term structural changes in the economy, or shifts between energy sources? The development of the Energy Conservation Indicators - a methodology that breaks down energy consumption data into their component parts - represents the first product of the efforts by the Commission of the European Communi­ ties within the framework of the cooperation between the Directorate General for Science, Research and Development and the Directorate General for Energy to find the answers to these questions. It provides a detailed and consistent basis for measuring the energy intensity of the Community as well as of each of the Member States.