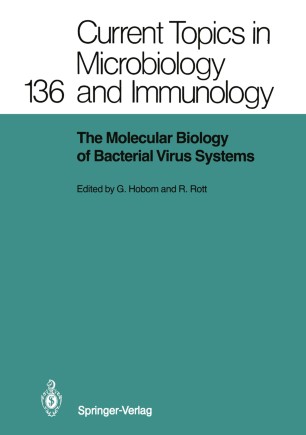 The fact that none of the known DNA polymerases is able to initiate DNA chains but only to elongate from a free 3' -OH group raises the problem of how replication is initiated, both at the replication origin and on Okazaki frag­ ments. It was first shown by A. KORNBERG et al. that a general mechanism to initiate replication is through the formation of an RNA primer catalyzed by RNA polymerases or by a new class of enzymes, the primases (KORNBERG 1980). This mechanism, which can be used in the case of circular DNA molecules or linear DNAs that circularize or form concatemers, cannot be used at the ends of linear DNAs since the RNA primer is removed from the DNA chain, and there is no way of filling the gap resulting at the 5' -ends of the newly synthesized DNA chain. In some cases linear DNA molecules contain a palin­ dromic nucleotide sequence at the 3' -end that allows the formation of a hairpin structure which provides the needed free 3'-OH group for elongation. This mechanism, first proposed by CAVALIER-SMITH (1974) for eukaryotic DNA repli­ cation, was shown to take place in several systems (KORNBERG 1980, 1982). Another mechanism to initiate replication consists in the specific nicking of one of the strands of a circular double-stranded DNA, producing a 3'-OH group available for elongation (KORNBERG 1980).