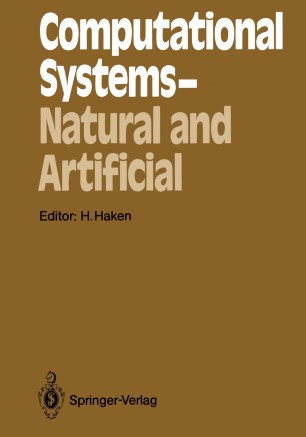 Proceedings of the International Symposium on Synergetics at Schloß Elmau, Bavaria, May 4–9, 1987

This book contains the invited papers presented at an international sympo­ sium held at Schloss Elmau, Bavaria (FRG), May 4-9, 1987. Leading experts from neurobiology, medicine, physics, and the computer sciences joined to­ gether to present and discuss their most recent results. A particular example of the natural computational systems discussed is the visual system of man and animals. A bridge between neural networks and physical systems is provided by spin glass models of neural networks, which were also treated. Concrete realizations of new kinds of devices in microelectronics were among the further topics, as were general problems on the calculation of chaotic orbits. In this way these proceedings present a number of quite recent ap­ proaches to problems which are of great current interest in fields concerned with computational systems. Bringing together scientists from neurobiology, physics, and the computer sciences has been one of the main aims of the synergetics enterprise, and in particular of its international symposia, from the very beginning. For exam­ ple, its first meeting held in 1972 at Schloss Elmau included, among others, papers by R. Landauer and J. W. F. Woo on cooperative phenomena in data processing, by W. Reichardt on mechanisms of pattern recognition by the visual system of insects, by B. Julesz on stereoscopic depth perception, and by H. R. Wilson on cooperative phenomena in a homogeneous cortical tissue model. Whole meetings and the corresponding proceedings were devoted to these problems, e. g.