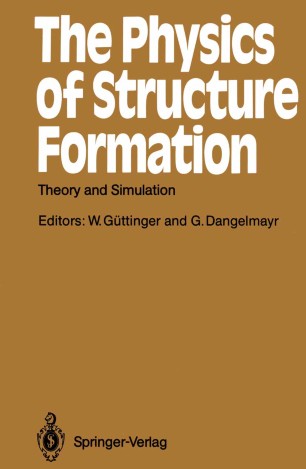 The Physics of Structure Formation

The formation and evolution of complex dynamical structures is one of the most exciting areas of nonlinear physics. Such pattern formation problems are common in practically all systems involving a large number of interacting components. Here, the basic problem is to understand how competing physical forces can shape stable geometries and to explain why nature prefers just these. Motivation for the intensive study of pattern formation phenomena during the past few years derives from an increasing appreciation of the remarkable diversity of behaviour encountered in nonlinear systems and of universal features shared by entire classes of nonlinear processes. As physics copes with ever more ambi­ tious problems in pattern formation, summarizing our present state of knowledge becomes a pressing issue. This volume presents an overview of selected topics in this field of current interest. It deals with theoretical models of pattern formation and with simulations that bridge the gap between theory and experiment. The book is a product of the International Symposium on the Physics of Structure Formation, held from October 27 through November 2, 1986, at the Institute for Information Sciences of the University of Tiibingen. The symposium brought together a group of distinguished scientists from various disciplines to exchange ideas about recent advances in pattern formation in the physical sciences, and also to introduce young scientists to the fi