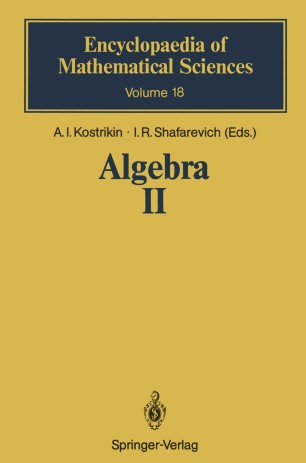 The algebra of square matrices of size n ~ 2 over the field of complex numbers is, evidently, the best-known example of a non-commutative alge­ 1 bra • Subalgebras and subrings of this algebra (for example, the ring of n x n matrices with integral entries) arise naturally in many areas of mathemat­ ics. Historically however, the study of matrix algebras was preceded by the discovery of quatemions which, introduced in 1843 by Hamilton, found ap­ plications in the classical mechanics of the past century. Later it turned out that quaternion analysis had important applications in field theory. The al­ gebra of quaternions has become one of the classical mathematical objects; it is used, for instance, in algebra, geometry and topology. We will briefly focus on other examples of non-commutative rings and algebras which arise naturally in mathematics and in mathematical physics. The exterior algebra (or Grassmann algebra) is widely used in differential geometry - for example, in geometric theory of integration. Clifford algebras, which include exterior algebras as a special case, have applications in rep­ resentation theory and in algebraic topology. The Weyl algebra (Le. algebra of differential operators with· polynomial coefficients) often appears in the representation theory of Lie algebras. In recent years modules over the Weyl algebra and sheaves of such modules became the foundation of the so-called microlocal analysis. The theory of operator algebras (Le.