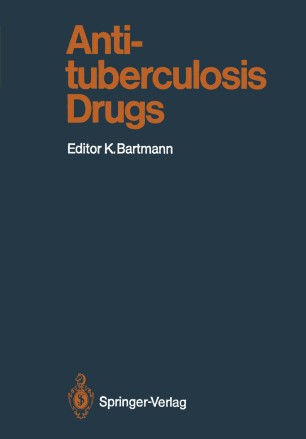 This volume deals specifically with those antituberculosis drugs which passed the preclinical phase and have been or are used in the treatment of tuberculosis and other mycobacterial diseases (except leprosy) in at least some parts of the world. Despite this restriction, there are 14 such drugs, and as a result this volume has reached rather large proportions. To prevent it from becoming even larger and more unwidely, most derivatives of antituberculotics have been omitted, especially where it is claimed that they provide only better bioavailibility or tolerability. Only in the chapter on the chemotherapy of diseases due to so-called atypical mycobacteria is the clinical use of the drugs described to a certain extent. In addition to antituberculotics, also discussed are antimicrobials which have been found to be effective against these mycobacteria. The sequence in which the drugs are described is historical, reflecting not the time of discovery but rather the first clinical application. This order was selected for reasons which are now no longer relevant. In this volume less emphasis is placed on detection, biological or synthetic production of antituberculotics, and structure-activity relationships. In contrast, emphasis is put on the degree, type, and mechanism of antimyco bacterial activity, pharmacokinetics, and biotransformation in animals and man, on experimental pharmacodynamics, and on the toxicity of antituberculotics used therapeutically.