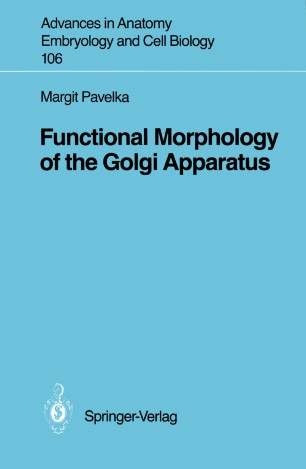 Functional Morphology of the Golgi Apparatus

This book gives a survey of the architecture of the Golgi apparatus, as revealed by morphological and cytochemical studies with a variety of cell types. The results presented include demonstrations of Golgi architecture in the course of cell differentiation, at varying functional cellular states, and under the influence of microtubule-disrupting agents. Emphasis is particularly placed on the organization of subsections of the Golgi apparatus and the questions of how Golgi subsections may be related to functional subcompartments of the Golgi system. By means of affinity-cytochemical approaches, using a palette of lectins of diverse sugar specificities, it is shown that functional subcompartments can be distributed in the complex Golgi system irrespective of the morphological subdivision in cis-medial-trans-transmost subsections. The use of pre- and post-embedment lectin-cytochemical approaches as a tool for the localization of functional Golgi subcompartments is of particular interest, especially as some of the lectins have been used in these approaches for the first time. This book intends to provide synoptic information on the architecture of the Golgi apparatus, its wide variability and possible arrangements of Golgi subcompartments.