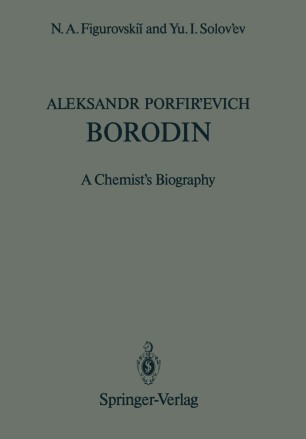 A full century has passed since the sudden and tragically premature demise of Aleksandr Porfir'evich Borodin in 1887 at the age of 53, when he was following with phenomenal success the disparate careers of musician, composer, organic chemist, and pioneer in women's medical education. As a unique figure among the remarkable group of geniuses who suddenly appeared in Russia in the middle of the last century and explosively propelled that country into the mainstream of world culture in the arts, humanities, and sciences, it might have been expected that Borodin was the object of much research. There is no doubt that the Russian contribution to the amazing development of structural chemistry in the last century has tended to be underplayed, while that in the rest of Europe has received much more attention. One wonders, in particular, whether Borodin's name might not have appeared in the chemical pantheon, as have those of Mendeleev, Markovnikov, Menshutkin, and many other Russians, if the aldol condensation, which he was the first to discover and investigate, had been named the Borodin condensation. Straightening out the record is important; Figurovskii and Solov'ev's biography does much in this respect. Just as meritorious have been the scholarly and exhaustive efforts of Professors Charlene Steinberg and George B. Kauffman, who have made the Russian text accessible to the Western world in their accurate and engrossing translation.