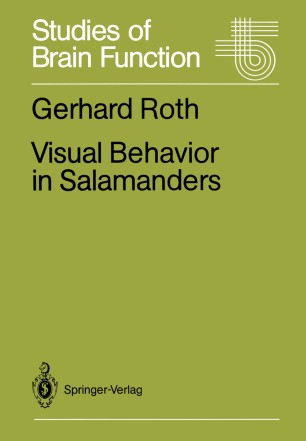 Salamanders are subject to misconceptions even among vertebrate zoologists and physiologists. They are often said to exist only in northern temperate zones, being bound to aquatic or very moist cool habitats. In reality, more than half of all salamander species live in subtropical and tropical zones, ex­ clusively in the New World. Again, more than half of the salamand~r species have become totally independent of aquatic habitats following the loss of a free larval stage. Many of the subtropical and tropical salamanders have become adapted to rather high temperatures up to 26-28 DC. The brain and the sensory systems of salamanders are often considered to be primitive, and their behavior is thought to be simple and uninfluenced by learning. However, careful studies show that the salamander brain possesses virtually all the ana­ tomical and functional properties found in anurans, which are usually regarded as being much more evolved with respect to the guidance of comparable behavior. Most of the salamander species not only possess a highly efficient visual system, which is the topic of the present work, but can orient themselves almost as effectively by means of olfaction, vibration sense, and electroreception. Furthermore, it has recently been shown that at least part of their behavior, especially that concerned with feeding and prey preferences, is strongly influenced by individual experience.