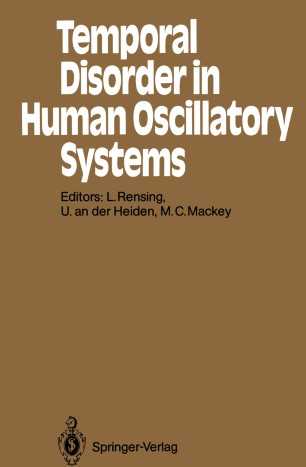 Proceedings of an International Symposium University of Bremen, 8–13 September 1986

Rhythms of the heart and of the nervous and endocrine system, breathing, locomotory movements, sleep, circadian rhythms and tissue cell cycles are major elements of the temporal order of man. The dynamics of these systems are characterized by changes in the properties of an oscillator, transitions from oscillatory states into chaotic or stationary states, and vice versa, coupling or uncoupling between two or more oscillators. Any deviation from the normal range to either more or less ordered states may be defined as temporal disorder. Pathological changes of temporal organization, such as tremor, epileptic seizures, Cheyne-Stokes breathing, cardiac arrhythmicities and circadian desynchronization, may be caused by small changes in the order (control) parameters. One major aspect of the symposium was the analysis of characteristic features of these temporal control systems, including nonlinear dynamics of interactions, positive, negative and mixed feedback systems, temporal delays, and their mathematical description and modelling. The ultimate goal is a better understanding of the principles of temporal organization in order to treat periodic diseases or other perturbations of "normal" dynamics in human oscillatory systems.