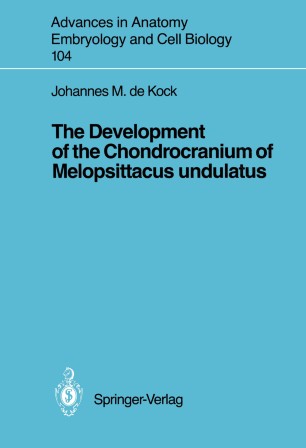 The Development of the Chondrocranium of Melopsittacus undulatus

The study of the avian chondrocranium began in 1866 with W.K. Parker's "On the structure and development of the skull in the ostrich tribe". With this and other excellent papers, W.K. Parker (1866, 1869, 1875, 1876) laid the foundation for the study of the bird's skull. W.K. Parker's work was continued by T.J. Parker (1888, 1891), who investigated the skull of Apteryx. Apart from the studies of the Parkers, the most important contribution to the study of the development of the bird's skull published before 1900 is Suschkin's (1899) excellent and detailed account of Tinnunculus. At the beginning of the twentieth century, Sonies (1907) made a further contribution with his study on the development of the chondrocrania of Anas and Gallus. The first major work to appear after that of Sonies was De Beer and Barr­ ington's (1934) study on the segmentation and chondrification of the skull of Anas. This was an important contribution, because they not only standardized the nomenclature but also compared the avian chondrocranium with that of reptiles and mammals and discussed morphological problems on the basis of these comparisons.