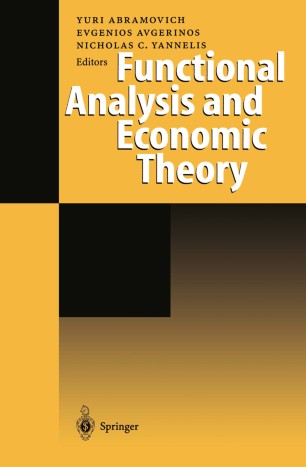 In July of 1996, the conference Nonlinear Analysis and its Applications in Engineering and Economics took place on the Greek island of Samos, the birthplace of Pythagoras. During this conference, a special session was held on th the occasion of the 50 birthday of the well known mathematician and math­ ematical economist Professor Charalambos Aliprantis, who, by his numerous friends, is usually called Roko. The story behind this nickname is not quite clear yet; it will be investigated further and will be made public prior to his th 60 birthday. (At this moment we have already found out that it has nothing to do with the famous movie Rocco and his Brothers even though Roko does have two brothers. ) Roko was born on the Greek island of Cephalonia on May 12,1946, and his elementary and secondary school education took place there. At 18 he entered the Mathematics Department at the University of Athens. Upon graduation from the University of Athens he proceeded with his graduate studies at Cal­ tech, where in 1973 he completed his Ph. D. degree in Mathematics under the supervision of Professor W. A. J. Luxemburg. His research career can be divided into two periods. The first one, till 1981, was devoted entirely to pure mathematics. The other one, after 1981, has been subdivided between pure mathematics and mathematical economics. The main objects of Roko's work in pure mathematics are spaces with order structure (Riesz spaces) and operators acting on them.