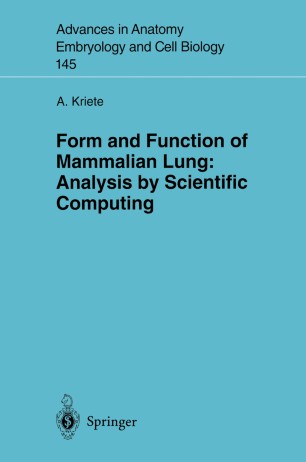 Form and Function of Mammalian Lung: Analysis by Scientific Computing

The study approaches the investigations of airway morphology of the lung with a new set of imaging and cmputer graphical methods, including confocal imaging, computer-guided image acquisition,visualization and fractal graphics. The key result is that, in contrast to the belief that the design of the conductive part of the lung of smaller mammals can be decribed with a trumpet model, the findings reported here document a strongly monopodial branching pattern with the functional consequence of a variation of dead space between the trachea and the acini. This non-dichotomic structural design finds its continuation within the respiratory units as the necessary requirement for an optimal space filling and dense packing which cannot be achieved by a dichotomic branching only. Based on a computer model, computational physics tightly coupled with computer visualistics enables functional simulation of the lung model regarding gas transport. The predicted variance in the ventilation of acini gives rise to an explanation of the well-known difference between the morphologically predicted and physiologically required diffusion capacity.