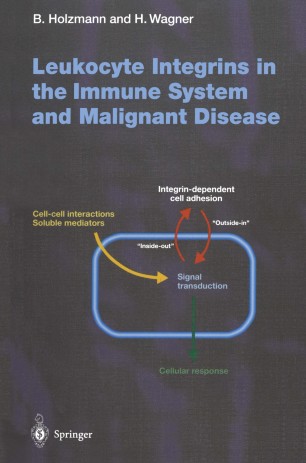 Leukocyte Integrins in the Immune System and Malignant Disease

Most lymphocytes recirculate throughout the body, migrating from blood through organized lymphoid tissues such as lymph nodes (LN) and Peyer's patches (PP), then to lymph and back to blood (GOWANS and KNIGHT 1964). Smaller numbers of lymphocytes migrate from blood to extranodal tissues such as pancreas and then through lymphatic vessels to LN (MACKAY et al. 1990). An important feature of this migration is the ability of lymphocytes to recognize and adhere to the surface of blood vessel endothelial cells before migrating through the vessel wall into surrounding tissue (CARLOS and HARLAN 1994; IMHOF and DUNON 1995; BUTCHER and PICKER 1996). Adhesion interactions of vascular endothelium with lymphocytes under flow or shear consist of at least four steps: (I) an initial transient sticking or rolling; (2) if the lymphocytes encounter appropriate activating or chemotactic factors in the local environment, rolling may be followed by a lymphocyte activation step that then leads to; (3) strong adhesion or sticking that may be followed by; (4) lym­ phocyte diapedesis into tissue (BUTCHER 1991; SHIMUZU et al. 1992; SPRINGER 1994; BARGATZE et al. 1995). Specific lymphocyte and endothelial adhesion molecules (AM) are involved in each step of this "adhesion cascade" (reviewed in CARLOS and HARLAN 1994; IMHOF and DUNON 1995; BUTCHER and PICKER 1996). This allows lymphocyte migration to be controlled at several different steps, leading to a combinatorial increase in specificity and sensitivity.