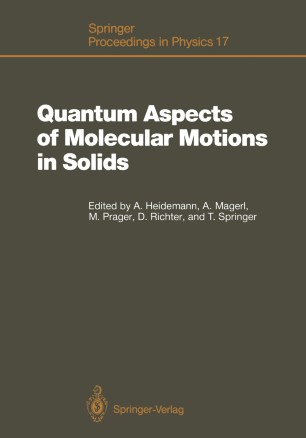 The Institut Max von Laue-Paul Langevin (ILL) in Grenoble regularly orga­ nizes workshops that deal with various applications of neutrons in physics, chemistry, biology and materials science. The workshop "Quantum Aspects of Molecular Motions in Solids" was jointly organized by the Institut Laue­ Langevin and the Institut fiir Festkorperforschung at the Kernforschungsan­ lage Jiilich and took place in September 1986 in Grenoble. Tunneling phenomena in molecular crystals were first observed with macro­ scopic methods like specific heat experiments and later also with NMR. Fi­ nally, the development of high resolution neutron scattering techniques like neutron backscattering led to direct spectroscopic observation of the tunnel split ground state. This breakthrough was achieved in 1975 at Jiilich. Since then the large variety of high-resolution techniques available in combination with high neutron flux have turned ILL into the leading laboratory in the field of tunneling spectroscopy. Since 1980 regular meetings of scientists involved in this topic have been organized every two years (Jiilich, Braunschweig, Nottingham) and have led to an intense exchange of ideas and experimental results. The present workshop is the fourth of this series and the first with published proceedings presenting the state of the art in this field. The eight review articles introduce scientists not involved in the subject to the actual discussion. Sessions on translational tunneling of light interstitials in metals as well as on tunneling phenomena in amorphous substances provide bridges to adjacent fields.