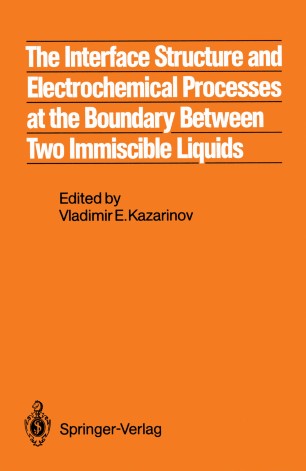 Studies on the electrochemical processes at the interface between two immiscible liquids began a long time ago: they date back to the end of the last century. Such celebrated scientists as Nemst and Haber, and also young A. N. Frumkin were among those who originated this science. Later A. N. Frumkin went a long way in furthering the studies at the Institute of Electrochemistry. The theory of the appearance of potential in a system of two immiscible electrolytes was developed and experimentally verified before the beginning of the thirties. In later years the studies in this area considerably lagged behind those conducted at metal electrodes which were widely used in different industries. In the past 15 years, however, the situation has radically changed and we have witnessed a drastic increase in the number of publications on the electrochemistry of immiscible electrolytes. We are glad to note that the investiga­ tions show not only a quantitative but also a qualitative change. The theoretical works on the oil/water interface test not only the thermodynamic aspects of the inter­ face but also recreate the molecular picture of the process. Along with the now con­ ventional oilfwater system, electrochemical studies are made on various membranes, including the frnest bilayer lipid membranes, and also on microemulsion systems. A prominent place in the investigation of the oil/water interface is occupied by photoprocesses that come into play at the interface between two ionic conductors.