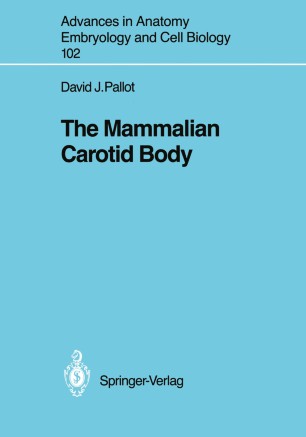 According to Valentin (1833) and Luschka (1862), the first description of the structure now known as the carotid body must be ascribed to a Swiss physiolo­ gist - Albrecht von Haller - who, in 1762, called it the ganglion exiguum. This claim, however, may be erroneous, for Tauber (1743) described a struc­ ture at the bifurcation on the common carotid artery and called it the ganglion minutum. Andersch (1797) reprinted the text of a study made by his father between 1751 and 1755. The original printing of this work had apparently been sold as waste paper! Andersch called the organ the ganglion intercaroticum on account of its location. He also specifically stated that the sympathetic chain, the glossopharyngeal and the vagus nerves sent branches into the organ. For a while the carotid body remained forgotten, to be rediscovered in 1833 by Mayer of Bonn who again remarked upon the branches of the sympathetic, glossopharyngeal and vagus nerves as sources of a nerve plexus which innervated the ganglion intercaroticurtl. . Valentin (1833) clearly regarded the structure as part of the sympathetic nervous system, although he too recognised that the vagus and glossopharyngeal nerves contributed conspicuously to its innervation. Thus it is evident that the anatomists of the eighteenth and early nineteenth centuries regarded the structure in the carotid bifurcation as one of the many ganglia which are interspersed in the course of the sympathetic nervous system.