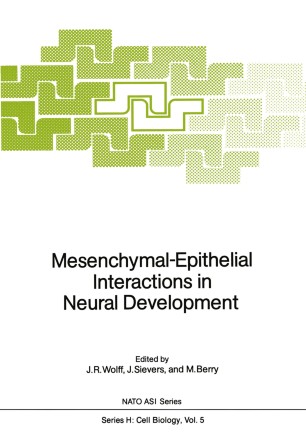 This book is based on the NATO Advanced Research Workshop on "Mesenchymal-Epithelial Interactions in Neural Development" which was held in Berlin during March 1986. The idea that it may be the time for this workshop arose from a discussion among the organizers who met at a conference in Innsbruck. During the twenties, Spemann demonstrated that, in vertebrates, the formation of neuroepithelium depends on the induction by specific mesodermal derivatives. This was about the first time that mesenchymal-epithelial interactions had been recognized as an important mechanism in the development of an epithelial organ. Since then two things had become clear: 1) The identity and role of molecules, elaborated at mesenchymal-neuroepithelial interfaces had been partially elucidated in spinal cord and peripheral nerve ontogeny but, until recently, had been ignored in studies on the development of the brain. 2) In many-non-neural epithelia, the surrounding mesenchyme regulates such fundamental developmental steps as, for example, cell proliferation, morphogenesis and cell differentia­ tion, and there is no reason to exclude similar influences and interactions from brain development. It seemed to us that the importance and implications of many of these findings had not been appreciated by many developmental neurobiologists and that an attempt should be made to initiate discussions and exchange of ideas among different groups of scientists involved in extracellular matrix (ECM) research. This turned out to be a formidable task because of the great diversity of disciplines contributing findings to this active field.