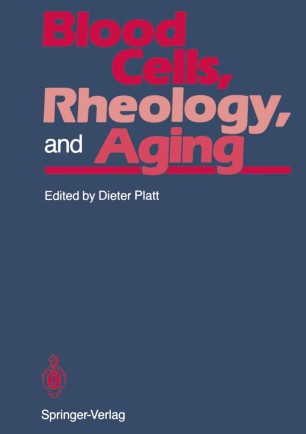 In the third Erlangen-Nuremberg symposium on experimental geronto­ logy we discussed the effect of aging on blood cells and rheology. Most studies with red cells have been performed on humans, rats, and rabbits. All these erythrocytes have no nucleus; the cells are therefore a model in which new synthesis of proteins is impossible. All the processes are age dependent except for exchange with the plasma. Investigations of red cells have attracted attention because of the latter's availability in large quantities from biochemists, physiologists, immunologists, and micro­ scopists. We now have a relative abundance of data on the biochemical and immunologic composition as well as on the ultrastructure of the cells. The second topic under discussion at the symposium was the immune system and cell receptors. One of the most apparent features of aging of the organism is progressive dysregulation of the immune system. As a result, the incidence of infection, cancer, and autoimmune and immune complex diseases increases. While we have a lot of new data on the function and differentiation of lymphoid cells, we have little informa­ tion on lymphocyte receptors during the aging process. Rheologic studies reflect changes in red cell deformability and blood coagulation. The erythrocyte deformability influences blood flow in all parts of the circulation. The fluidity of the red cell membranes controls whole blood viscosity. During aging, there are significant alterations in blood coagulation and hemostasis. One of the best known modifications of blood co­ agulation is a typical thrombophilic tendency with aging.