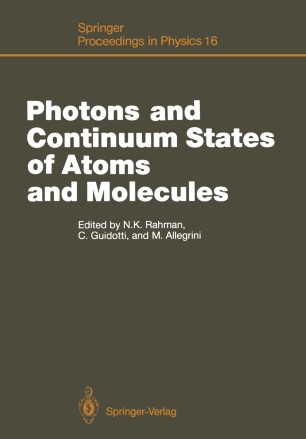 Photons and Continuum States of Atoms and Molecules

Since 1981 there has been an attempt in Europe to organize a series of small meetings/workshops/tavole rotonde with the aim of bringing together physi­ cists and chemists interested in problems concerning atoms or molecules in­ teracting with external photons where the continua are investigated. The number of problems that fall into this category turns out to be vast. However, it is not possible to make a strict separation into problems con­ cerning atomic and molecular collisions and those related to the usual spec­ troscopy. This admixture of two disciplines, discussions on the role of photons and on the interaction of external electromagnetic fields with the continuum provided a central motivation for these workshops. The fourth of this series of meetings was held at Cortona between June 16 and 20, 1986. It was attended by about 100 researchers in the field and there were 43 presentations, all having equal time. These talks form the subject matter of this volume. The idea of publishing the proceedings of these meetings is not new. It allows one to have small meetings in which the subject matter can be discussed at length in a lively atmosphere. However, after the meeting is over, the speakers can collect their thoughts and produce articles in which the results of their interaction with the other participants can be incorporated.