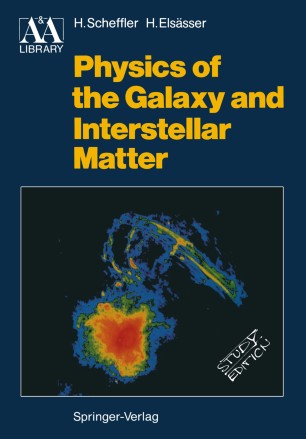 Physics of the Galaxy and Interstellar Matter

The present book is a translation of the original German edition (published in 1982) with some minor corrections and improvements. The guide to sup­ plementary and advanced literature given in the Appendix, however, has been brought up to date. This book is addressed primarily to students taking astronomy as a prin­ cipal or subsidiary subject, and to scientists of related fields, but amateur as­ tronomers should also be able to profit from it. For most chapters an elementary knowledge of mathematics and physics will be sufficient, however, Chaps. 5 and 6 impose somewhat greater requirements. In addition the reader should already be acquainted with the basic concepts of stellar physics as treated in introduc­ tory books, including the spectral types, the system of stellar magnitudes and colours, absolute magnitudes and luminosities, the Herlzsprung-Russell dia­ gram and its interpretation. A modem textbook should use SI units. On the other hand, the use of the cgs system is still the prevailing custom in astrophysics - together with the special units of astronomy: length is quoted in parsecs [pc], mass in solar masses [M0] and time in years [a]. We have therefore compromised and employed both cgs and SI units in this book, whichever was the appropriate choice in each instance. A table for conversion of cgs units into SI units and vice versa is given in the Appendix.