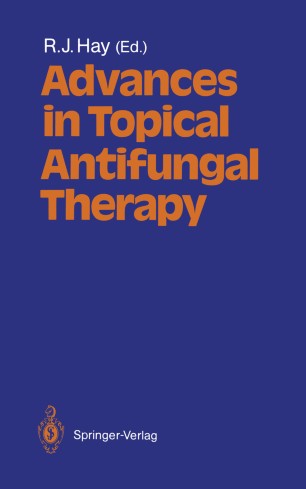 R.J. Hay Institute of Dermatology, United Medical and Dental Schools of Guy's and St. Thomas's Hospitals, 5 Lisle Street, London WC2H 7BJ, Great Britain It is a problem familiar to all dermatologists, as with other physi­ cians, that a large number of common diseases can be alleviated or improved but not cured. Infections, particularly those caused by bacteria or fungi, may appear at first to be different, as in many cases it is possible to destroy the causative organism with antibio­ tics to produce a remission or cure. However, the reality is less simple and many problems continue to beset therapy. Firstly, in approaching the treatment of fungal infections it is important to assess the role of the fungi isolated in the pathogenesis of the disease in order to choose the most appropri­ ate therapy. While the invasion of the stratum corneum or struct­ ures derived from the epidermis, such as hair or nail, is the main consequence of infection in superficial mycoses, fungi may also cause disease indirectly or in combination with other micro-organ­ isms. In some instances several organisms are apparently involved in the pathogenesis of skin disease such as chronic paronychia [1].