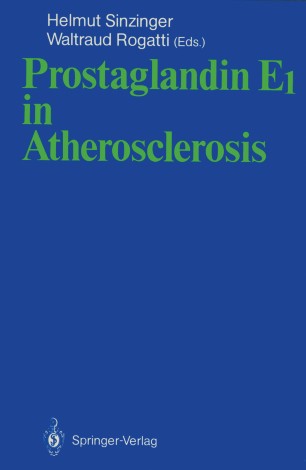 Prostaglandins were discovered in the early 1930s following research into their extremely potent biological effects. During the last decade especially two com­ pounds sharing the same receptor on the platelet surface, the antiaggregatory prostaglandins PGE and PGI , attracted considerable interest in cardiovascular 1 2 medicine. Since 1973 PGE has been widely used in the therapy of peripheral vascular 1 disease. Although its effects on platelet function, smooth muscle cells, vascular wall cell lipid metabolism, red cell deformability and plasmatic coagulation are well known, these factors altogether do not fully explain the efficacy of PG El in the therapy of advanced atherosclerosis. This book is the outcome of a workshop organised by Schwarz GmbH (Mon­ heim, FRG) which was held at Stresa, Italy, in April 1986. The coming together of researchers and clinicians produced a survey of the chemistry, physiology, pharmacology and clinical efficacy of PGE which will serve as a new insight 1 into the complexity of basic and clinical applications of PGE • 1 Helmut Sinzinger Waltraud Rogatti Table of Contents Pharmacological Actions of Prostaglandin E.