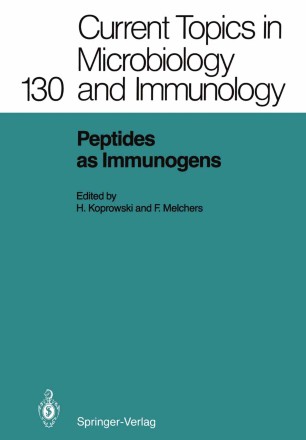 The humoral response of the immune system to a foreign antigen usually requires the recognition of two antigenic determinants. The one, called the carrier, is recognized by T-Iymphocytes, the other, called the hapten, by B-Iympho­ cytes. As a consequence, T - and B-Iymphocytes proliferate, B-Iymphocytes produce hapten-specific antibodies, and the system develops memory to the antigens. It was long thought that antigens would form a bridge to mediate the cooperation of T - and B-Iymphocytes. However, it now appears that antigens are broken down to fragments which then act as carrier determinants for T -lymphocytes. The cells which originally process antigen are called an­ tigen-presenting cells. They have phagocytic properties. They can take up and degrade antigens, in the case of pro­ teins to peptides. The peptides of protein antigens reappear on the surface of the antigen-presenting cells, where they must become associated with membrane proteins encoded by genes of the major histocompatibility complex (MHC) in order to be recognized by T-Iymphocytes. To activate helper T-Iym­ phocytes which cooperate in antibody responses, MHC class II molecules have to be expressed on the surface of the antigen-presenting cells. Once T -lymphocytes have be­ come activated, they are ready to cooperate with B cells.