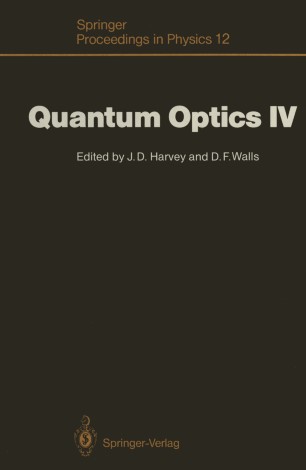 This volume contains notes based on the lectures delivered at the fourth New Zealand Symposium in Laser Physics, held at the University of Waikato, Hamilton, February 10-15, 1986. At this meeting, about 80 physicists work­ ing in many parts of the world met to discuss topics of current interest in contemporary laser physics and quantum optics. These symposia, which have been held triennially since 1977, have evolved into an important meet­ ing ground for experimentalists and theoreticians working in a very rapidly developing field. As the format has evolved, the number of participants, in­ cluding the number from overseas, has grown steadily, and this year a poster session was included for the first time, enabling a far greater range of topics to be discussed than was possible in the limited lecture time available. At this meeting the major interest of the participants concerned the the­ oretical investigation of squeezed states of the radiation field and the very recently reported experimental observations of such states. Other related ar­ eas of work reported here include bistability and chaotic behaviour of optical systems, the quantum theory of measurements, optical tests of general rel­ ativity, and the current technological limitations governing the stabilization of lasers. The editors would like to thank the participants for providing detailed notes for publication shortly after the meeting, and the various organisa­ tions that have provided financial support.