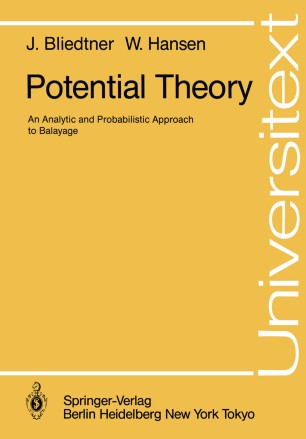 An Analytic and Probabilistic Approach to Balayage

During the last thirty years potential theory has undergone a rapid development, much of which can still only be found in the original papers. This book deals with one part of this development, and has two aims. The first is to give a comprehensive account of the close connection between analytic and probabilistic potential theory with the notion of a balayage space appearing as a natural link. The second aim is to demonstrate the fundamental importance of this concept by using it to give a straight presentation of balayage theory which in turn is then applied to the Dirichlet problem. We have considered it to be beyond the scope of this book to treat further topics such as duality, ideal boundary and integral representation, energy and Dirichlet forms. The subject matter of this book originates in the relation between classical potential theory and the theory of Brownian motion. Both theories are linked with the Laplace operator. However, the deep connection between these two theories was first revealed in the papers of S. KAKUTANI [1], [2], [3], M. KAC [1] and J. L. DO DB [2] during the period 1944-54: This can be expressed by the·fact that the harmonic measures which occur in the solution of the Dirichlet problem are hitting distri­ butions for Brownian motion or, equivalently, that the positive hyperharmonic func­ tions for the Laplace equation are the excessive functions of the Brownian semi­ group.