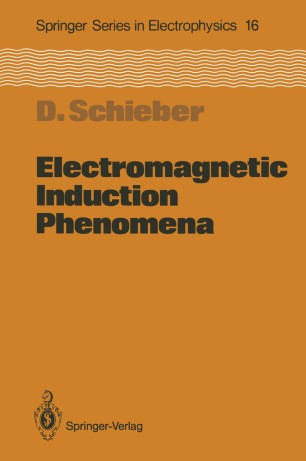 From an engineering perspective, Electrodynamics is the province of two cul­ tures. The most easily identified of the two is primarily concerned with phe­ nomena in which the propagation of electromagnetic waves is crucial. Includ­ ed are the designers of microwave circuits, of antennae and of many-wave­ length communication channels. The interests of the second group focus on dynamical processes associated with the evolution of field sources, whether these be electrons and holes migrating in a semiconductor, or currents diffus­ ing in a moving metal. Because the second culture is primarily concerned with the interaction be­ tween electromagnetic fields and media, where the latter are often responsible for the dominant dynamical processes, it addresses applications that are more widely ranging. A few from a very long list would include electrostatic print­ ing, rotating machines, power transmission apparatus, the electromagnetics of biological systems and physical electronics. Whether by nature or by de­ sign, the phenomena of interest are generally electro quasi static or magneto­ quasistatic in this second branch of electrodynamics. It is tempting to say that the two branches of electrodynamics can be distinguished by the frequency range, but electron-beam and microwave-magnetic devices, with their respec­ tive plasma oscillations and spin waves, are examples where the frequencies can be in the GHz range while the fundamental interactions are quasistatic. By design, so also are those that determine the frequency response of a transistor.