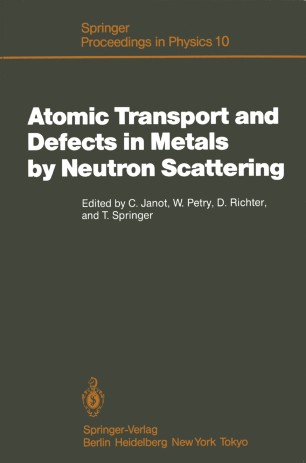 Atomic Transport and Defects in Metals by Neutron Scattering

The Institut Max-von-Laue-Paul Langevin (ILL) in Grenoble regularly organ­ ises workshops that deal with the various applications of neutrons in physics, chemistry, biology and also in nuclear physics. The workshop" Atomic Trans­ port and Defects in Metals by Neutron Scattering", jointly organised by the Institut Laue-Langevin and the Institut fiir Festkorperforschung of the KFA­ Jiilich, was held in October 1985 in Jiilich. The study of problems in metal physics and in physical metallurgy is a traditional field of neutron scattering. The most commonly used methods are diffuse elastic, small-angle and inelastic scattering of neutrons. A number of problems can be identified where neutrons yield information that is supple­ mentary to that from other methods such as x-ray diffraction, synchrotron radiation or electron microscopy. In certain fields, for example spectroscopy for the investigation of atomic motions or for the investigation of magnetic properties, neutron scattering is a unique method. The facilities at the High Flux Reactor of the ILL, and also at the Jiilich and at other medium flux research reactors, have contributed numerous re­ sults in these fields. It was the aim of this workshop to give a survey of the present state of neutron scattering in metal physics.