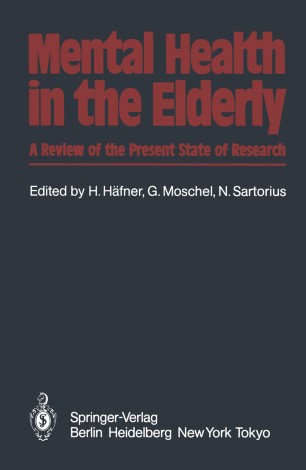 Mental Health in the Elderly

A Review of the Present State of Research

H. Hafner, G. Moschel, N. Sartorius The size of the world's population aged over 65 was estimated at about 250 million in 1980; by the year 2025 it is expected to grow to about 760 million (see Hauser, this volume). This sharp increase in life expectancy at birth, in some countries amounting to almost 100% in only a hundred years, has resulted from better nutrition and improved living conditions, hygiene and medical care. Not only life expectancy at birth, but also further life expectancy in advanced age has shown a clear, though more moderate increase. This increased life expectancy, together with a simultaneous fall in birth rates, has caused the mean age of the world population and, especially, the average age of the population of industrial nations to climb substantially in recent times, a development which will reach its peak only some decades from now. For these demographic reasons alone, health care authorities will have to devote more attention to the health problems of the elderly. The main task of medical research is to develop improved methods of disease prevention and treatment. Yet, because the full benefits of such research are only realized after many years of work, researchers have already begun to respond to demographic pressures by focussing part of their efforts on the study of illnesses characteristic of old age.