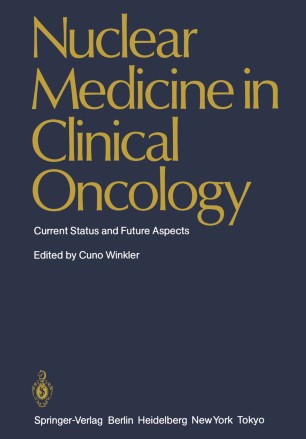 The introduction of nuclear medicine into oncology dates back to the early 1 940s, when Lawrence reported on the tumor retention of 32P-phosphate, von Hevesy and von Euler soon afterwards published their fundamental work on the metabolism of phosphorus in sarcoma cells, and when almost at the same time Keston and his coworkers de­ scribed their observation of the accumulation of radioactive iodine in metastases of a thyroid carcinoma. Since that time innumerable publi­ cations have appeared in oncologic literature which deal with the application of nuclear medical methods in experimental cancer re­ search and also in the diagnosis and treatment of malignant tumors. The significance of some originally very successfully applied clinical methods naturally has changed over the years. For instance, scin­ tigraphy became somewhat less important for the purely morpho­ logic assessment of certain tumors after the introduction of transmis­ sion computerized tomography and modem sonographic methods into clinical practice. On the other hand, however, it has also been possible to further develop scintigraphy to a decisive extent, both 'with refer­ ence to the test substances applied and in view of the instrumentation. As far as the scintigraphic equipment is concerned, the introduction of static and sequential digital imaging by means of scintillation camera­ computer systems in the mid-1960s represents important progress, as does the recent development of emission computerized tomography with single photon and positron emitters.