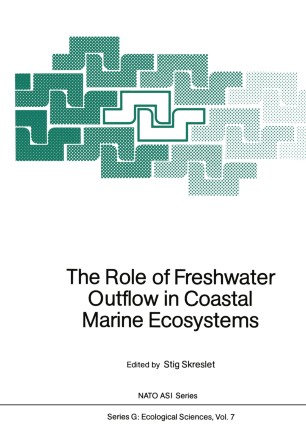 The Role of Freshwater Outflow in Coastal Marine Ecosystems

Over the last decade or two marine scientists have become more aware of the role of freshwater outflow in coastal waters. Some have raised the question whether or not regulation of river flow may change the biological productivity in coastal marine ecosystems. The idea of organising a workshop to deal with this problem, arose from parallel concern in Norway and Canada, but it was soon recognised that the scientific interests were also shared by research groups in other countries. After the initial contacts had been made, it was agreed to establish a committee which should assist the workshop director in organising the workshop. The Organising committee consisted of K.F. Drinkwater, Bedford Institute of Oceanography, Canada; S. Skreslet (workshop director), Nordland College, Norway; V.S. Smetacek, Institut fur Meereskunde an der Universitat Kiel, Germany; and H. Svendsen, University of Bergen, Norway. An Advisory committee was established to provide terms of reference for the Organising committee, with regard to the programme and selection of participants. This committee con­ sisted of J.B.L. Matthews (chairman), Scottish Marine Bio­ logical Association, U.K.; T.R. Parsons, University of British Columbia, Canada; R. S~tre, Institute of Marine Research, Nor­ way; M.M. Sinclair, Fisheries and Oceans, Canada; and W.S. Wooster, University of Washington, Canada.