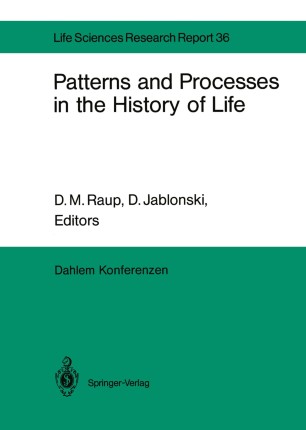 Patterns and Processes in the History of Life

Report of the Dahlem Workshop on Patterns and Processes in the History of Life Berlin 1985, June 16–21

Hypothesis testing is not a straightforward matter in the fossil record and here, too interactions with biology can be extremely profitable. Quite simply, predictions regarding long-term consequences of processes observed in liv­ ing organisms can be tested directly using paleontological data if those liv­ ing organisms have an adequate fossil record, thus avoiding the pitfalls of extrapolative approaches. We hope to see a burgeoning of this interactive effort in the coming years. Framing and testing of hypotheses in paleon­ tological subjects inevitably raises the problem of inferring process from pattern, and the consideration and elimination of a broad range of rival hy­ is an essential procedure here. In a historical science such as potheses paleontology, the problem often arises that the events that are of most in­ terest are unique in the history of life. For example, replication of the metazoan radiation at the beginning of the Cambrian is not feasible. How­ ever, decomposition of such problems into component hypotheses may at least in part alleviate this difficulty. For example, hypotheses built upon the role of species packing might be tested by comparing evolutionary dy­ namics (both morphological and taxonomic) during another global diversi­ fication, such as the biotic rebound from the end-Permian extinction, which removed perhaps 95% of the marine species (see Valentine, this volume). The subject of extinction, and mass extinction in particular, has become important in both paleobiology and biology.