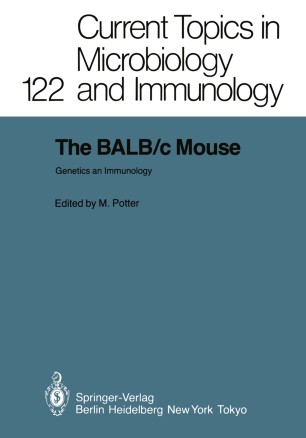 The mouse was first used in immunological research by Paul Ehrlich in 1891 in an extraordinary series of experiments on the maternal transfer of antitoxic immunity. A short 22 years later in 1913 Halsey Bagg acquired a stock of albino mice from a commercial dealer and used them in a series of experiments on learning. Because he was interested in the genetics of intelligence, Halsey Bagg began breeding a pedigreed line of these mice that were subsequently named for him - Bagg Albino. Though Halsey Bagg is not credited with initiating the inbred strains of mice, his stock curiously has played an indisputably important role. Bagg Albinos were progenitors of the present day BALB/c family of sublines - the subject of this book. They were also used as one of the parents in the development of inbred strains A, CBA and C3H, three other very famous strains. Today the BALB/c mouse is among the five most widely used inbred strains in biomedical research and a particular favorite in immunology and infectious disease research. The hallmark of the BALB/c response to so many kinds of infections is susceptibility and sometimes an exaggerated susceptibility, but this paradoxically is not associated with immunodeficiency as BALB/c is an excellent responder to immuni­ zation. These characteristics have made the BALB/c mouse a model for identifying genes that determine susceptibility to infectious and neoplastic diseases. In 1985 the laboratory BALB/c mouse became 72 years old. The current filial generations are somewhere around 350 generations [MURPHY].