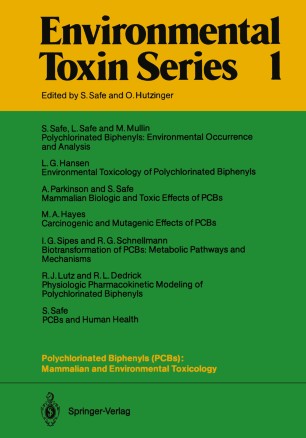 Polychlorinated biphenyls (PCBs) have been produced commercially since be­ fore 1930. They proved to be highly versatile mixtures and their uses continued to expand during the early 1970's even after the unanticipated world-wide en­ vironmental contamination had been discovered (Jensen et aI. , 1969; Koeman et aI. , 1969). Over 600,000 metric-tons were produced and/or used in the U. S. during this time and it is estimated that worldwide production totaled about 1,200,000 metric-tons (Table 1). With low acute toxicities (Fishbein, 1974), these mixtures were considered gen­ erally biologically inactive even though industrial exposure had demonstrated he­ patic and dermatological effects (Fishbein, 1974; Hansen, 1987). Thus, use and disposal were not carefully monitored and it is estimated that one-third of the world-wide production of PCBs has been released into the global environment (Table 1). Table 1. Estimated production and disposition of PCBs b U. s. a Worldwide 6 6 Production/use 610 X 10 kg 1200 X 10 kg Mobil environmental reservoir 82 400 Static reservoirs In service 340 Dumps 130 Total static 470 800 a NAS, 1979 b Tatsukawa and Tanaba, 1984 2 Environmental Distribution Many countries now impose strict controls on the use and release of PCBs. Re­ lease into the environment has declined dramatically in the last decade, but con­ tinued release from reservoirs (Table 1) into burdened ecosystems (Table 2) ap­ pears inevitable for several more decades (Barros et aI. , 1984).