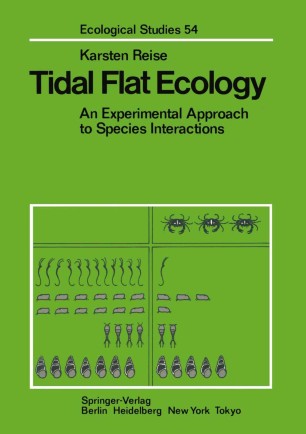 An Experimental Approach to Species Interactions

The tidal coastline presents a fascinating ecological world. Rocky shores with their recurrent zonation of algae and sessile invertebrates demonstrate the orderliness of nature, apparently obeying general explan­ atory principles. The niche theory could just as well have hatched out of the tight species-packing on the coral reef flats. Fluxes of carbon and nitrogen are best studied in mangroves and salt marshes with their outstanding primary productivity; the bare mud and sands of the tidal flats are different. Their ecological treasures are well concealed, and perhaps not to everybody's taste. Pick up a piece of tidal sediment and see how it resembles a large, rotten cheese! It smells, is slimy and sticky, is punched with holes and crowded with various worms. Tidal flats receive detritus from both the land and the sea. They sup­ port a rich benthic community which attracts birds from far distant breeding grounds, and serves as a nursery for crabs, shrimp and fish. Tidal flats are a busy ecological turntable. They import low valued organic matter, and they export well-fed birds to the land and grown-up fish to the sea. They offer ideal opportunities for aquaculture but are also used as dumping grounds for industrial wastes. All this may call for a marine ecologist to investigate the basic processes involved. Yet there is still another reason.