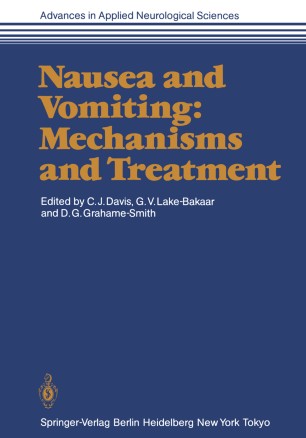 Nausea and Vomiting: Mechanisms and Treatment

The following papers were presented at an international symposium on the mechanisms and treatment of nausea and vomiting in man held in Oxford in 1984. I believe that this meeting was the first occasion on which representatives from such a wide variety of scientific and clinical specialities had come together to review and debate the spectrum of the vomiting phenomenon. An attempt was made to put before an invited international audience all the pertinent facts on the different facets of the topic and then to encourage extensive discussion of the contentious issues. The first day of the meeting was devoted to the basic science ap­ proach to the problem and the second day to the more clinical aspects. This format has been broadly retained in the layout of the book, with the addition of summary chapters reviewing each day's contributions and focusing upon areas of particular importance. Acknowledgement must here be made to the enormous input from the many participants who either spoke in the debate or rose and themselves gave small presenta­ tions in addition to those of the invited speakers. The meeting occurred at a time of increasing interest in the problem of nausea and vomiting, especially because of its importance in cancer chemotherapy and radiation therapy, and even in space travel.