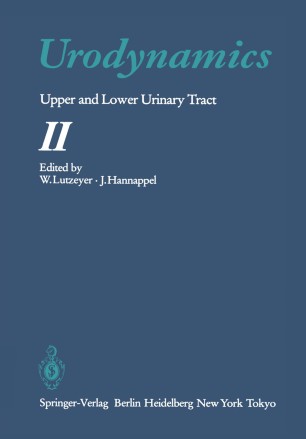 The preface to Urodynamics - Upper and Lower Urinary Tract edited by LUTZEYER and MELCHIOR (Springer-Verlag 1973) mentions the self-evidence of using functional examinations in other medical de­ partments: "It is self-evident that the cardiologist uses the EeG not just routinely, but continuously in an intensive-care unit, where it is computerized and always on call. It is self-evident, too, in gastro­ enterology and pulmology that a functional analysis is based on readings of different electronic probes. In urology, however, we tend to rely on optical control by cystoscopy, static data in order to reach a functional interpretation that is based on this information alone. " Referring to the preface mentioned above, especially the upper uri­ nary tract is said to be assessed mainly from an anatomic-morpho­ logic point of view in the clinical routine, though in this case we are also mainly concerned with an active transport system. 1971, which the Twelve years after the urodynamic meeting in above-mentioned volume was based on, a second urodynamic meet­ ing took place in Aachen that was called and also dealt with "Re-: viewing the Aachen 1971 Meeting. " Its purpose was to review which of the statements that had been made more than a decade before were still valuable, what had to be added or revised, and which ex­ perimental tests and results could be clinically applied.