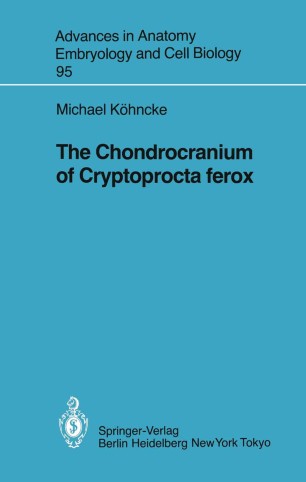 The Chondrocranium of Cryptoprocta ferox

Comparative anatomy of the vertebrate head was taken a great step forward about a hundred years ago when the Born method of reconstruction - using wax plates - was applied to examination of chondrocrania. Thus, a highly detailed and very exact description became possible. Enthusiastically taken up by many, Gaupp with his work on Lacerta (1900) was the first to apply it. Regrettably, efforts were not concentrated on a few, clear systematic groups, but were spread rather widely over forms ranging from easily available domestic species, e.g. Oryctolagus (Voit 1909) to rare exotic species such as Tachyglossus (Gaupp 1908) and Ornithorhynchus (Wilson 1901). Furthermore, the research remained relatively static in its considerations, and until very recently a chon­ drocranium was treated as complete in its development in the same way that a fully developed skull is complete and in its form specific for a species or genus. The stadium optimum had to be abandoned as an idealized fiction giving way to the concept of a dynamically progressing ontogeny.