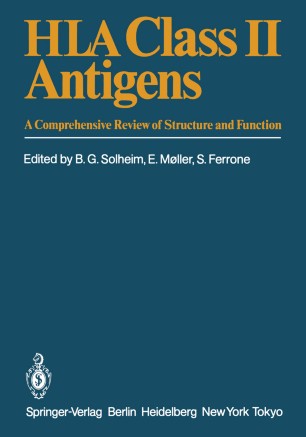 A Comprehensive Review of Structure and Function

This volume deals with the structure and function of molecules that have, during the last decade, turned out to have a central role in immune responses. Trans­ plantation antigens were discovered and characterized by Gorer about 50 years ago, and the biological basis for the unequalled complexity of their variability between individuals within a species, in spite of extreme conservation between species, was the subject of intense research and discussion for many years. During the days of belief in "immune surveillance" against spontaneously developing tumors, it was suggested that histoincompatibility between members of one species would prevent cancer from being a contagious disease and thus a threat to the species. Immunologists involved in human transplantation had to learn and care about the complexity, especially after 1967, when it was found that HLA antigens were the products of the human MHC. Rejection of HLA-identical sib kidney grafts was so rare, even in those days, that cases of rejection were described in scientific papers.