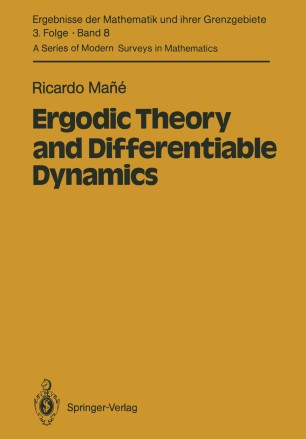 This version differs from the Portuguese edition only in a few additions and many minor corrections. Naturally, this edition raised the question of whether to use the opportunity to introduce major additions. In a book like this, ending in the heart of a rich research field, there are always further topics that should arguably be included. Subjects like geodesic flows or the role of Hausdorff dimension in con­ temporary ergodic theory are two of the most tempting gaps to fill. However, I let it stand with practically the same boundaries as the original version, still believing these adequately fulfill its goal of presenting the basic knowledge required to approach the research area of Differentiable Ergodic Theory. I wish to thank Dr. Levy for the excellent translation and several of the correc­ tions mentioned above. Rio de Janeiro, January 1987 Ricardo Mane Introduction This book is an introduction to ergodic theory, with emphasis on its relationship with the theory of differentiable dynamical systems, which is sometimes called differentiable ergodic theory. Chapter 0, a quick review of measure theory, is included as a reference. Proofs are omitted, except for some results on derivatives with respect to sequences of partitions, which are not generally found in standard texts on measure and integration theory and tend to be lost within a much wider framework in more advanced texts.