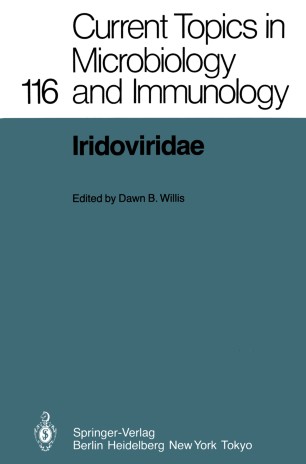 In 1976 the International Committee on Taxonomy of Vi­ ruses (ICTV) created the family Iridoviridae to encompass several different vertebrate and invertebrate viruses that did not fit into any of the other established groups. The unifying features of this new family were (1) polyhedral symmetry; (2) large (approximately 170 kilobase pairs), lin­ ear, double-stranded DNA genomes; and (37) a cytoplas­ mic site of replication. The name "iridovirus" was derived from the observa­ tion that larvae infected with many of the insect viruses, as well as purified pellets of these viruses, glowed with a blue or green iridescence - presumably due to the Bragg effect of the viral crystals. However, none of the vertebrate "iridoviruses" displayed this particular characteristic. An attempt was made to substitute the more descriptive name of "icosahedral cytoplasmic deoxyribovirus", but not only was this term too unwieldy, it also did not conform to the latinized nomenclature the ICTV wished to adopt. So, for both historical and esthetic reasons, "Iridoviridae" was adopted as a family name, with Iridovirus as the genus represented by the type 1 iridescent insect virus, Tipula iri­ descent virus. At the 1982 ICTV Meeting, enough biochem­ ical data had accumulated to permit the establishment of the following five genera in the family Iridoviridae: English vernacular International Type species name name 1. Small iridescent Iridovirus Tipula iridescent virus insect virus (Type 1) 2. Large iridescent Chloriridovirus Mosquito iridescent insect virus virus (Type 2) 3.