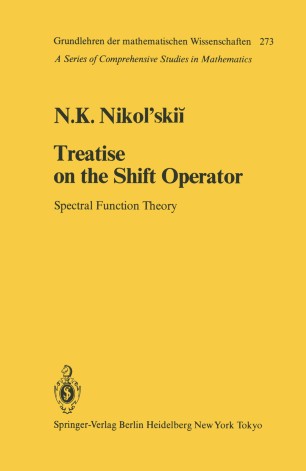 Treatise on the Shift Operator

This book is an elementary introduction to non-classical spectral theory. Mter the basic definitions and a reduction to the study of the functional model the discussion will be centered around the simplest variant of such a model which, formally speaking, comprises only the class of contraction operators with a one­ dimensional rank of non-unitarity (rank(I - T*T) = rank(I - TT*) = 1). The main emphasis is on the technical side of the subject, the book being mostly devoted to a development of the analytical machinery of spectral theory rather than to this discipline itself. The functional model of Sz. -Nagy and Foia§ re­ duces the study of general operators to an investigation of the . compression T=PSIK of the shift operator S, Sf = zf, onto coinvariant subspaces (i. e. subspaces in­ variant with respect to the adjoint shift S*). In the main body of the book (the "Lectures" in the proper meaning of the word) this operator acts on the Hardy space H2 and is itself a part of the operator of multiplication by the independent variable in the space L2 (in the case at hand L2 means L2(lf), If being the unit circle), this operator again being fundamental for classical spectral theory.