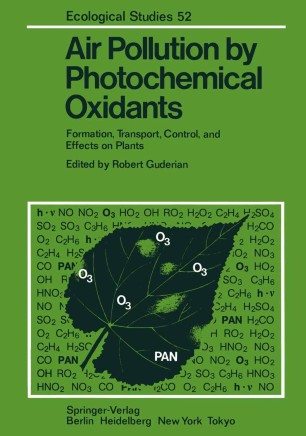 Photochemical oxidants are secondary air pollutants formed under the influence of sunlight by complex photochemical reactions in air which contains nitrogen oxides and reactive hydrocarbons as precursors. The most adverse components formed by photochemical reactions in polluted air are ozone (0 ) 3 and peroxyacetyl nitrate (PAN), among many other products such as aldehydes, ketones, organic and inorganic acids, nitrates, sulfates etc. An analysis and evaluation of the available knowledge has been used to characterize the relationships among emissions, ambient air concentrations, and effects, and to identify the important controlling influences on the formation and effects of photochemical oxidants. The biological activity of photochemical oxidants was first clearly manifested during the early 1940's, when vegetation injury was observed in the Los Angeles Basin in the United States. Since that time, as a consequence of the increasing emissions of photochemical oxidant precursors, the photochemical oxidants have become the most important air pollutants in North America. In other parts of the world, for example South and Central America, Asia, and Australia, photo­ chemical oxidants threaten vegetation, particularly the economic and ecological performance of plant life. According to my knowledge, the first observations of ozone and PAN injury to vegetation in Europe were made by Dr. Ellis F. Darley (Statewide Air Pollution Research Center, University of California, Riverside, California) during a study visit (1963/64) to the Federal Republic of Germany.