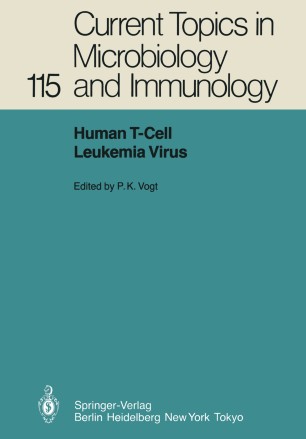 characteristic features in common with the genome of other retroviruses: long terminal repeats (L TR), and coding regions for internal proteins (gag), for re­ verse transcriptase (pol), and for glycosylated virion surface proteins (env) , ar­ ranged in the sequence gag, pol, env from the 5' to the 3' end of the genome. However, the HTL V genome also contains some specific features not shared with all other retroviruses: the LTR regions are unusually long (745 base pairs, with 298 base pairs constituting the R region), but unlike the long L TRs of mouse mammary tumor viruses, they do not contain open reading frames. A stretch of noncoding sequences separates the gag and the pol genes. Most interestingly, the HTLV genome contains a region between the 3' end of the env gene and the L TR, called the pX region, that encompasses four open reading frames. Leukemic T cells freshly obtained from patients contain the HTL V provirus but usually do not express it. However, once established in culture, these cells produce viral proteins and release type C particles. Likewise, T cells infected and transformed by HTL V in vitro synthesize virus. Such producing cell lines have been widely used in seroepidemiological surveys and continue to be of importance for detailed studies of viral proteins and nucleic acids.