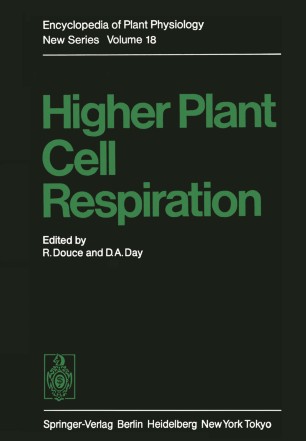 I am honored by the editor's invitation to write a Preface for this volume. As a member of an older generation of plant physiologists, my lineage in plant respiration traces back to F. F. BLACKMAN through the privilege of having M. THOMAS and W. O. JAMES, two of his "students," as my mentors. How the subject has changed in 40 years! In those dark ages B. 14C. most of the information available was hard-won from long-term experiments using the input-output approach. Respiratory changes in response to treatments were measured by laborious gas analysis or by titration of alkali from masses of Pettenkofer tubes; the Warburg respir­ ometer was just beginning to be used for plant studies by pioneers such as TURNER and ROBERTSON. Nevertheless the classical experiments of BLACKMAN with apples had led to important results on the relations between anaerobic and aerobic carbohydrate utilization and on the climacteric, and to the first explicit concept of respiratory control of respiration imposed by the" organiza­ tion resistance" of cell structure. THOMAS extended this approach in his investi­ gations of the Pasteur effect and the induction of aerobic fermentation by poi­ sons such as cyanide and high concentrations of CO , JAMES began a long 2 series of studies of the partial reactions of respiration in extracts from barley and YEMM'S detailed analysis of carbohydrate components in relation to respira­ tory changes added an important new dimension.