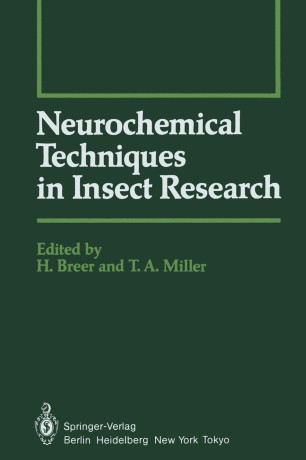 Neurochemical Techniques in Insect Research properly emphasizes the insect. It only scratches the surface of the exploding repertoire of general neuro­ chemical techniques that can be applied to insect research in 1985. But it al­ so presents the advantages of using insects for studying certain biological questions that are approachable by neurochemical techniques. Even more so, it summarizes the long list of unique problems encountered in attempting to study insects by neurochemical techniques. As in other volumes of this series, the contributors to this volume are the authorities in the field. They themselves have developed much of the material presented. Thus the sum effort provides a true description of the state of the art; and, pleasantly, it does so in a very complete and clear manner. Readers of this series will not need to be reminded that, despite the fact that vertebrates make up only about 3% of all animal species, research in in­ vertebrates such as insects has lagged behind that on vertebrates, at least in the neurochemistry area; the relative simplicity and large cell size of the in­ sect nervous system has always provided incentive for work in neurophysiol­ ogy and neuroanatomy. Toxicology interests will always stimulate a certain amount of work on insect neuropharmacology, and insects are extremely suitable for several areas of toxin research. Last but not least, the insects are beautiful organisms for which the applications of genetics can be made to the study of nervous system function.