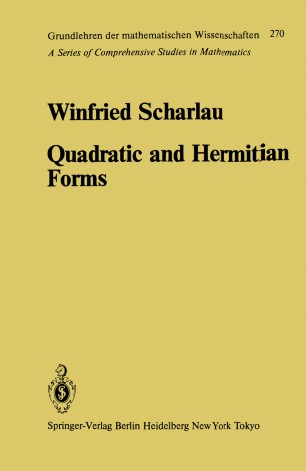 For a long time - at least from Fermat to Minkowski - the theory of quadratic forms was a part of number theory. Much of the best work of the great number theorists of the eighteenth and nineteenth century was concerned with problems about quadratic forms. On the basis of their work, Minkowski, Siegel, Hasse, Eichler and many others crea­ ted the impressive "arithmetic" theory of quadratic forms, which has been the object of the well-known books by Bachmann (1898/1923), Eichler (1952), and O'Meara (1963). Parallel to this development the ideas of abstract algebra and abstract linear algebra introduced by Dedekind, Frobenius, E. Noether and Artin led to today's structural mathematics with its emphasis on classification problems and general structure theorems. On the basis of both - the number theory of quadratic forms and the ideas of modern algebra - Witt opened, in 1937, a new chapter in the theory of quadratic forms. His most fruitful idea was to consider not single "individual" quadratic forms but rather the entity of all forms over a fixed ground field and to construct from this an algebra­ ic object. This object - the Witt ring - then became the principal object of the entire theory. Thirty years later Pfister demonstrated the significance of this approach by his celebrated structure theorems.