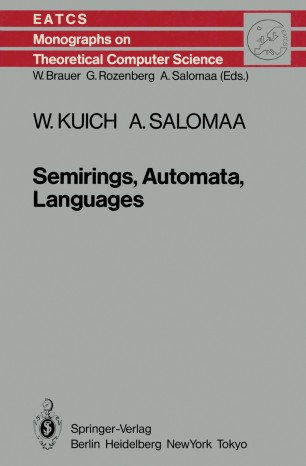 Automata theory is the oldest among the disciplines constituting the subject matter of this Monograph Series: theoretical computer science. Indeed, automata theory and the closely related theory of formal languages form nowadays such a highly developed and diversified body of knowledge that even an exposition of "reasonably important" results is not possible within one volume. The purpose of this book is to develop the theory of automata and formal languages, starting from ideas based on linear algebra. By what was said above, it should be obvious that we do not intend to be encyclopedic. However, this book contains the basics of regular and context-free languages (including some new results), as well as a rather complete theory of pushdown automata and variations (e. g. counter automata). The wellknown AFL theory is extended to power series ("AFP theory"). Additional new results include, for instance, a grammatical characterization of the cones and the principal cones of context-free languages, as well as new decidability results.