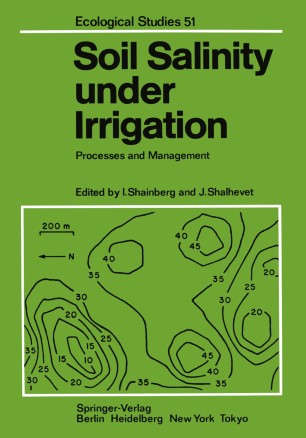 The importance of irrigation in the world's agriculture is rapidly increasing. Although it is practised on a large scale mainly in arid and semi-arid zones, supplementary irrigation is becoming popular in semi-humid regions as well. The record of irrigation speaks for itself in terms of increased crop production. However, the question remains as to how permanent the achievement may be. Judging from history, it seems that irrigation eventually failed in many regions because the knowledge and technology available to society at the time were incapable of coping with the problems created. Undoubtedly soil salinity is the most prevalent and widespread problem limiting crop productivity in irrigated agriculture. It has, therefore, attracted the attention of the scientific community since the advent of modern agronomic research. Through the past six to seven decades a considerable body of information has been accumulated, which has promoted the understanding of the principles involved and helped to develop the technology for coping with the problems. Our present knowledge, if judiciously applied, is adequate for coping with many of the salinity problems resulting from mismanagement of irrigation and drainage. But for this knowledge to be used, it has to be generally known and understood and be re-examined from time to time.