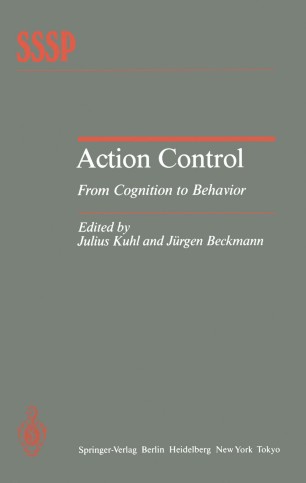 From Cognition to Behavior

"It is not thought as such that can move anything, but thought which is for the sake of something and is practical." This discerning insight, which dates back more than 2000years to Aristotle, seems to have been ignored by most psycholo­ gists. For more than 40years theories of human action have assumed that cogni­ tion and action are merely two sides of the same coin. Approaches as different as S-O-R behaviorism,social learning theory, consistency theories,and expectancy­ value theories of motivation and decision making have one thing in common: they all assume that "thought (or any other type of cognition) can move any­ thing," that there is a direct path from cognition to behavior. In recent years, we have become more and more aware of the complexities in­ volved in the relationship between cognition and behavior. People do not always do what they intend to do. Aside from several nonpsychological factors capable of reducing cognition-behavior consistency, there seems to be a set of complex psychological mechanisms which intervene between action-related cognitions, such as beliefs, expectancies, values, and intentions,and the enactment of the be­ havior suggested by those cognitions. In our recent research we have focused on volitional mechanismus which presumably enhance cognition-behavior consistency by supporting the main­ tenance of activated intentions and prevent them from being pushed aside by competing action tendencies.